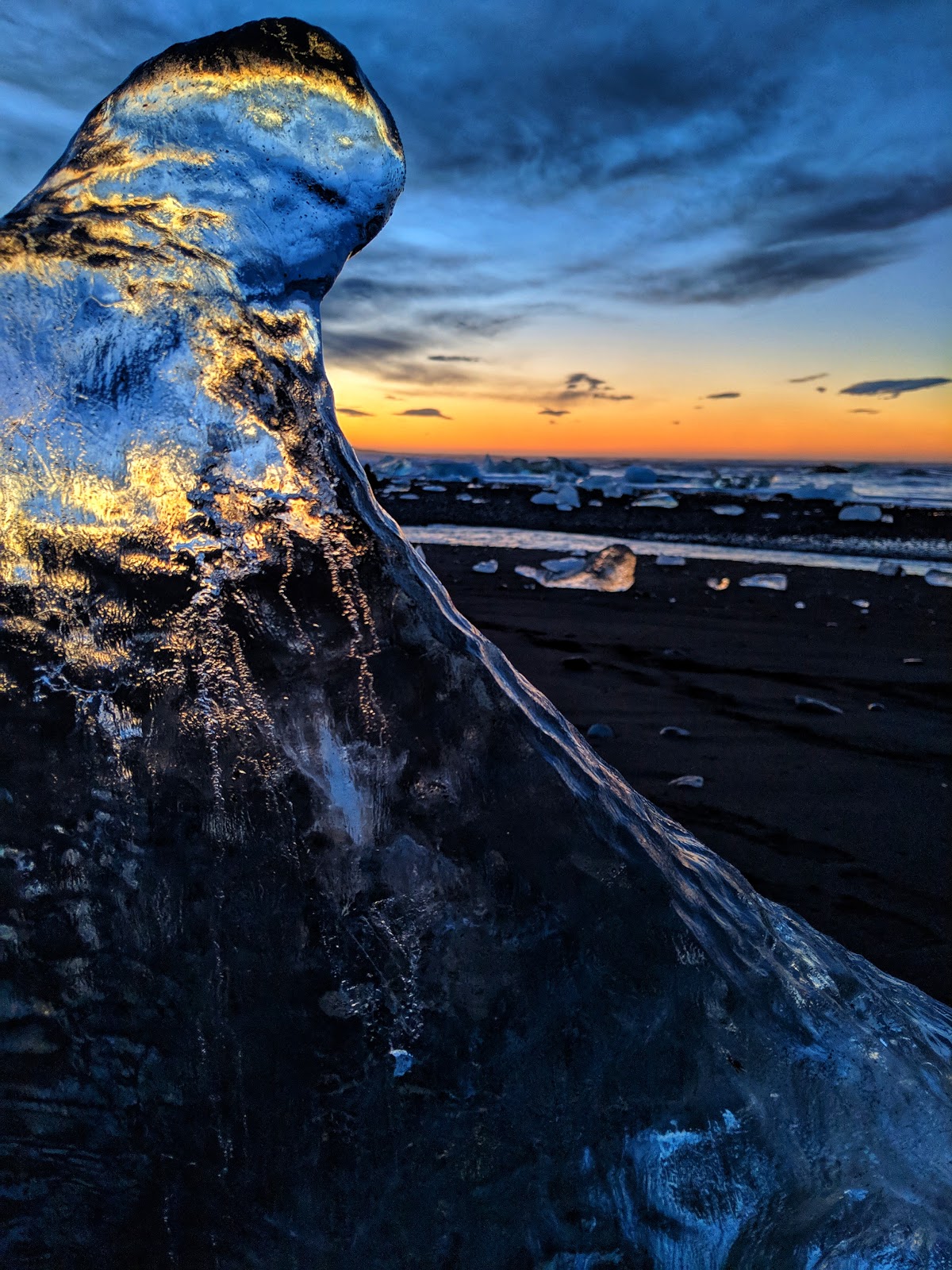 I've just gotten back from 5 days in Iceland! Previously I wrote about how I planned out our budget for this trip so this will be a two part post, the first is our itinerary and the second will be the full break down of our budget.

Before I get into our four day itinerary here are a few important facts about Iceland and travelling there in January.
Day 1: Reykjavik and the Blue Lagoon

I was travelling with my fiance, one of my best friends, her husband, sister, brother and another best friend. All in we were a group of 7! Five of us arrived at Keflavik airpot at  am having taken a WOW airline over night flight from Toronto. A quick note about WOW, you get what you pay for! Nick (my fiance) and I have flown many budget airlines and WOW was the best so far. They definitely seemed the most roomy, we weren't packed in quite so tightly as we have been on other budget airlines. You get absolutely nothing that you don't pay for (including water!), however we have travelled a lot and knew that in advance so we packed water bottles, snacks etc. My friends didn't love WOW as much as we did, but I think its a matter of perspective!

As soon as we landed we picked up our Toyota Landcruiser from Iceland Car Rentals. They seem to be one of the cheaper options for renting a car in Iceland and we had no problems or negative experiences. We drove into Reykjavik and crashed petty hard. We slept until about noon, giving us only a few hours before we went to pick the remaining two people up from the airport. In Reykjavik we wandered the city and tried one of Iceland's famous hot dogs. Seriously, they are known for their hot dogs with the strange sweet creamy mustard. We hit up the most famous hot dog stand Bæjarins Beztu Pylsur. The hot dogs are made with lamb, although you really couldn't taste it. The traditional order to get is with everything, which includes raw onion, crispy fried onion, their mustard which is sweet, savoury, and creamy and ketchup. I didn't LOVE the hot dog but Nick did, and when in Rome...or in our case Iceland.


Afterwards we wandered up to Hallgrimskirkja which is the big church. We didn't pay to go to the top but we went inside and its really beautiful. It's completely different then the ornate churches in Europe but somehow just as, if not more impressive. 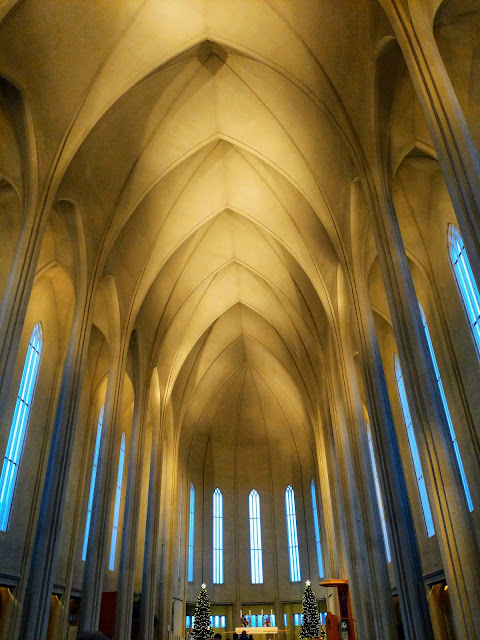 Around 2pm we headed to the airport to grab our remaining friends who were flying in from Nice, France and we headed to the Blue Lagoon. A lot of travel blogs, and trip advisor reviews say that the Blue Lagoon was not worth it, or too touristy, but we loved it! We arrived just after sunset and it was gorgeous. The basic ticket includes a towel, a mud mask, drink and admittance into the sauna and steam room. I have to admit that when places include a free drink I am suspicious of how big it will be but they were serving full size pints and full sizes glasses of wine or champagne at the swim up bar. We spent about three hours there just relaxing and it was a really great way to decompress after a flight. It was a highlight of the trip for everyone!


After Blue Lagoon, we headed back to Reykjavik to dinner. Everyone says eating out in Reykjavik is expensive and to be sure, you can find really pricey meals, however we settled on a little pub, Frederiksen Ale House and it was pretty reasonably priced. They had a wide selection of food and beer and it was really good!


Day 2: Hella & Half the Golden Circle

We woke up in Reykjavik and grabbed breakfast before heading out to do the Golden Circle. We went to a random cafe for breakfast and tried their hot spring bread, Rúgbrauð. Rúgbrauð is an Icelandic rye bread. It is traditionally baked in a pot or steamed in special wooden casks by burying it in the ground near a hot spring. It ends up almost being like a cake in terms of texture and is a bit sweet tasting. I had it with smoked salmon and cream cheese.

After breakfast, our original plan was to do the entire Golden Circle however when we realized how much day light we had, plus how squished we were in the car with everyones luggage, we decided to head to our AirBnB which was just outside Selfoss, about an hour away from Reykjavik, to drop off our bags. Our AirBnB was FANTASTIC. It was in a bit of a farm land area overlooking a river and had a hot-tub. We were only a 20min drive away from the grocery store. We had tons of space and the place was just really beautiful.

From Selfoss we drove to Kerid Cater, the Geysir and Gulfoss Falls. Doing the Golden Circle tour yourself is a great way to save money and travel on your own timeline. We brooke it up over two days because of the short day light but I can see how you could easily fit this into one day during the summer season.


Once the sun went down we headed back to Selfoss, hit up the grocery store, liquor store and went home to hot tub and get a glimpse of the Northern Lights. Seeing the Northern Lights is really dependant on the weather. It was a bit cloudy but around midnight we were lucky enough to sit in the hot tub and see a brief show of the them!

On sunday we finished the Golden Circle tour with  Þingvellir National Par.  Þingvellir is the site of some Game of Thrones filming, its used often for the North of the Wall shots. While we were there we saw Oxararfoss Waterfall which again, like everything in Iceland, is stunning. It snowed overnight so everything had a winter wonderland feel. After the waterfall we walked to Lögberg, which literally means "Law Rock", this is the site of the Althing, which means parliament. Dating back to 930 A.D the presiding official over the Althing would gather everyone at Lögberg and they would make decisions, its viewed as Iceland's original parliament.

From there we drove east to Seljalandsfoss waterfall. At 60m high the waterfall is quite impressive. You can also walk all the way behind it! 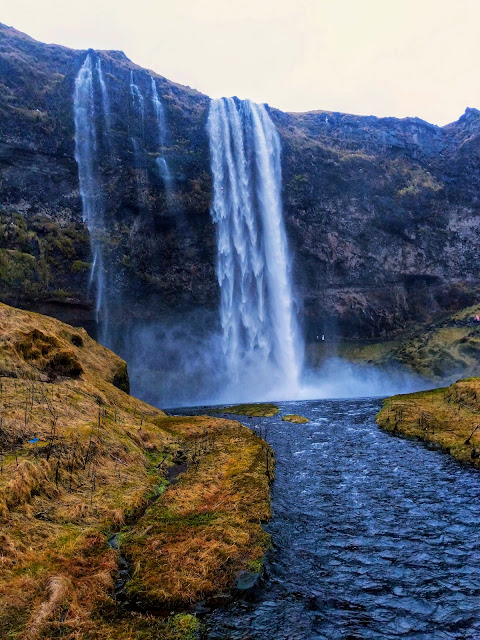 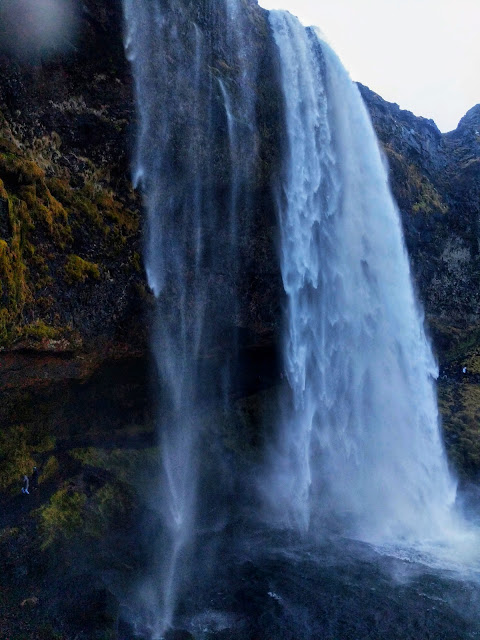 
On our last full day we woke up very early to drive the 3 hours and 45mins to Jokulsarlon. This was my favourite day. We drove most of the time in the dark, but when we arrived the sunrise was just beginning. We left so early because most of our friends were taking an ice cave tour that began at 930 am. A few of us opted out of it and instead spent the morning on Diamond Beach watching the sunrise. Its called Diamond Beach because as the glacier has melted away from the ocean (thank you global warming) large junks of the ice are left behind. The beach is the most beautiful and soft black sand, making it look like the beach is littered with diamonds. 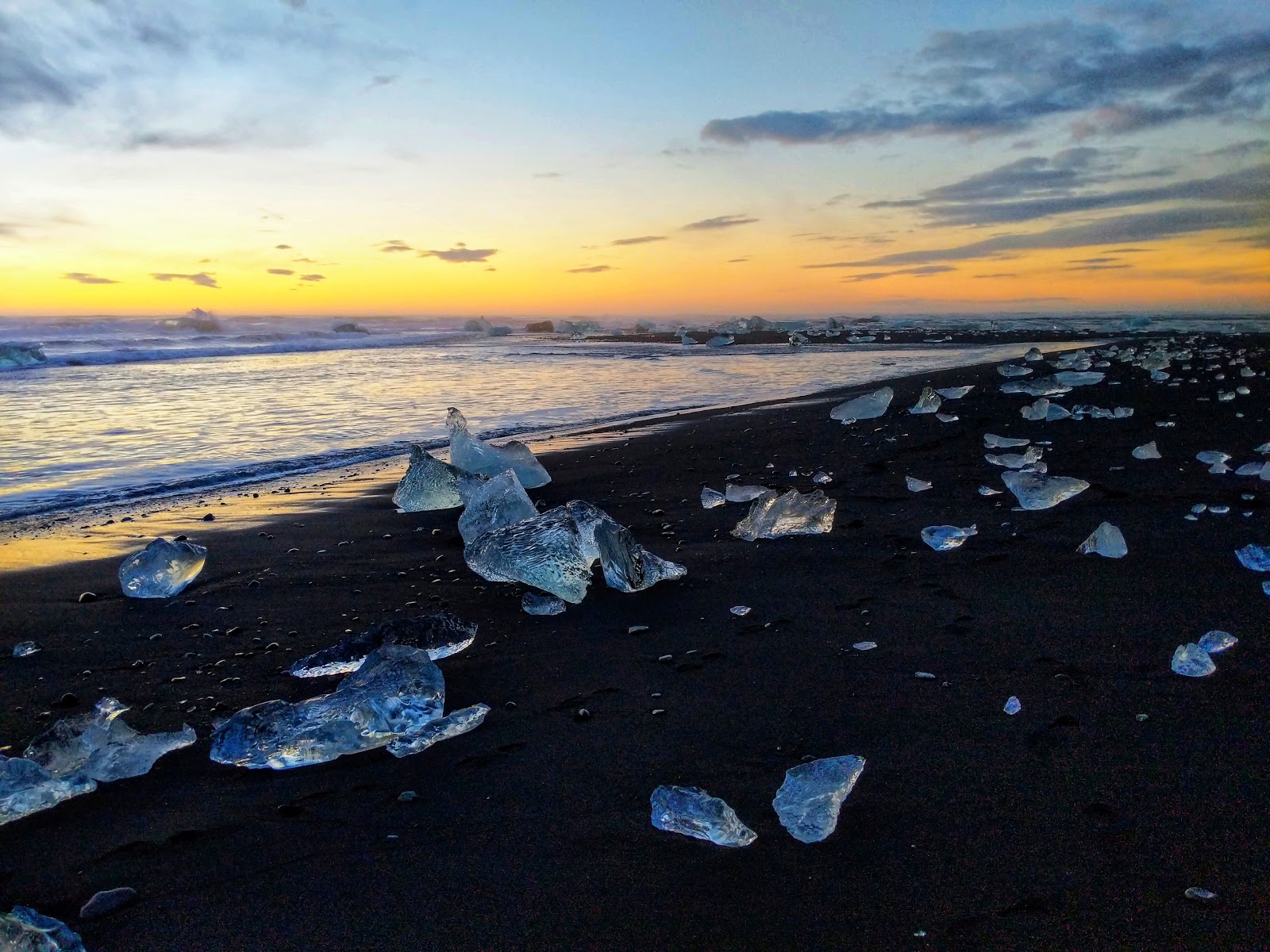 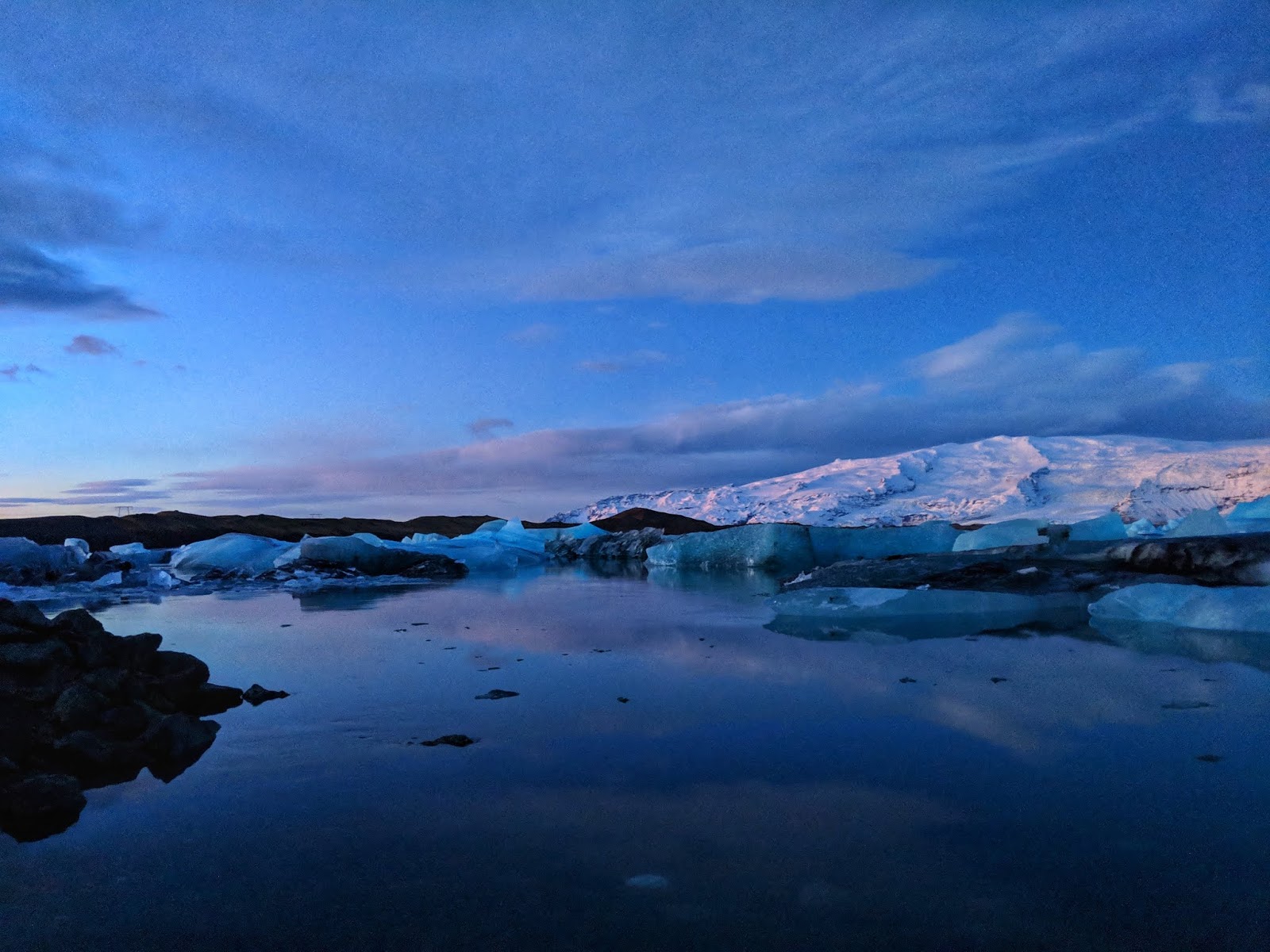 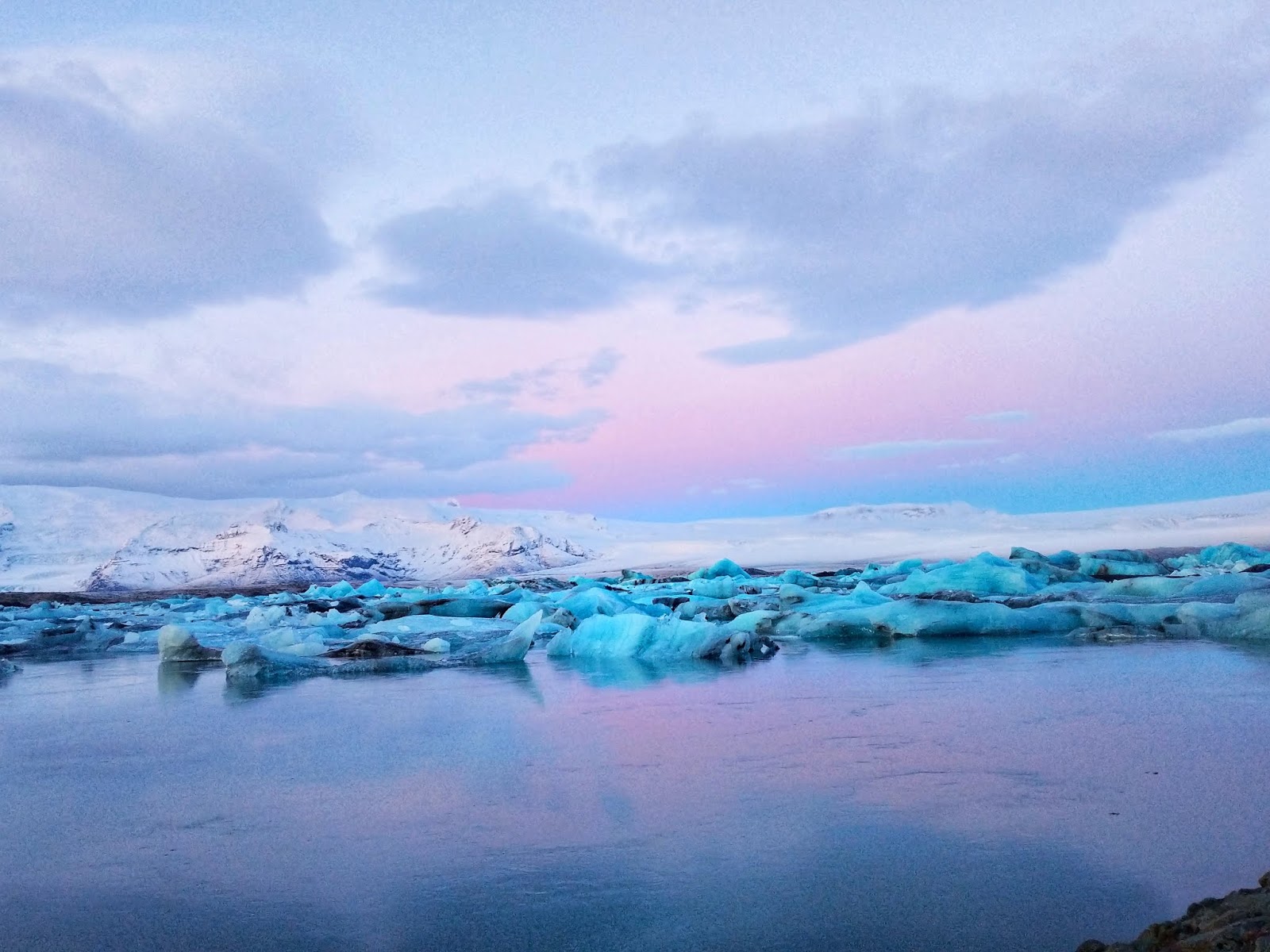 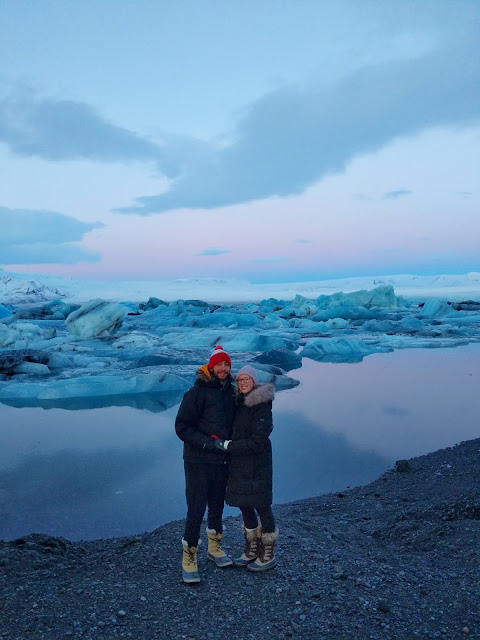 Now that the sun was up, for our drive back we got to see the national park we had been driving through to get to Jökulsárlón. The landscape was like nothing I have ever seen. You're right beside the ocean, and right beside mountains - they are literally just a few meters over. In my travels I've found you usually have to go up and into the mountains but here there was big vast plains that turned to beach and to the ocean on one side and then gorgeous mountains on the other. 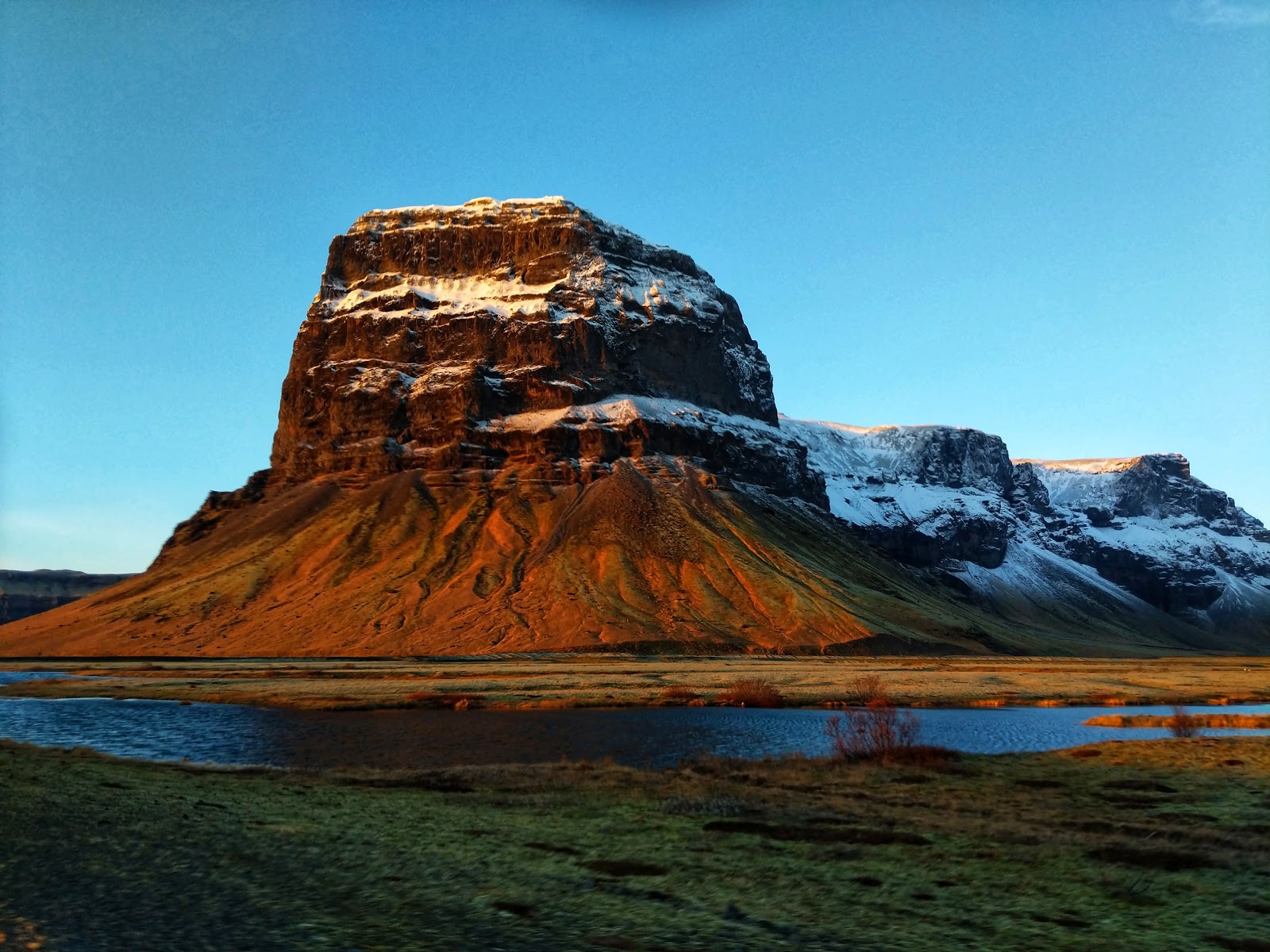 We left our AirBnB and drove back to Keflavik airport. We loved our time in Iceland. Before going I was wary of going for such a short amount of time but in the end four days was perfect. Of course there is more I'd like to see, there are some pretty awesome mountains and water falls on the Western side of the country that we didn't get to, but in four days I felt like we got to see a bunch of natural beauty and just enjoy the country. I would definitely recommend renting a car, even if you chose to go on a few tours, having a car gives you the freedom to go exploring. If you're based out of Reykjavik there is a lot to see within a one or two hours drive. The people of Iceland were very nice and friendly, we didn't have any negative experiences! Hopefully we will go back one day in the summer and go see the Western side, although after having a rather tourist free trip I'm not sure I'd want to go when the throngs of tourists are there!

I'll post our budget in the next few days so you can see how we managed to afford the trip! Coming up, I'll be focusing the blog more on budgeting and saving because the question I get asked most is "How can you afford to travel so much?" Follow along on Instagram @thenomadicbee and don't forget to subscribe so you don't miss a post! Post any questions in the comment section!